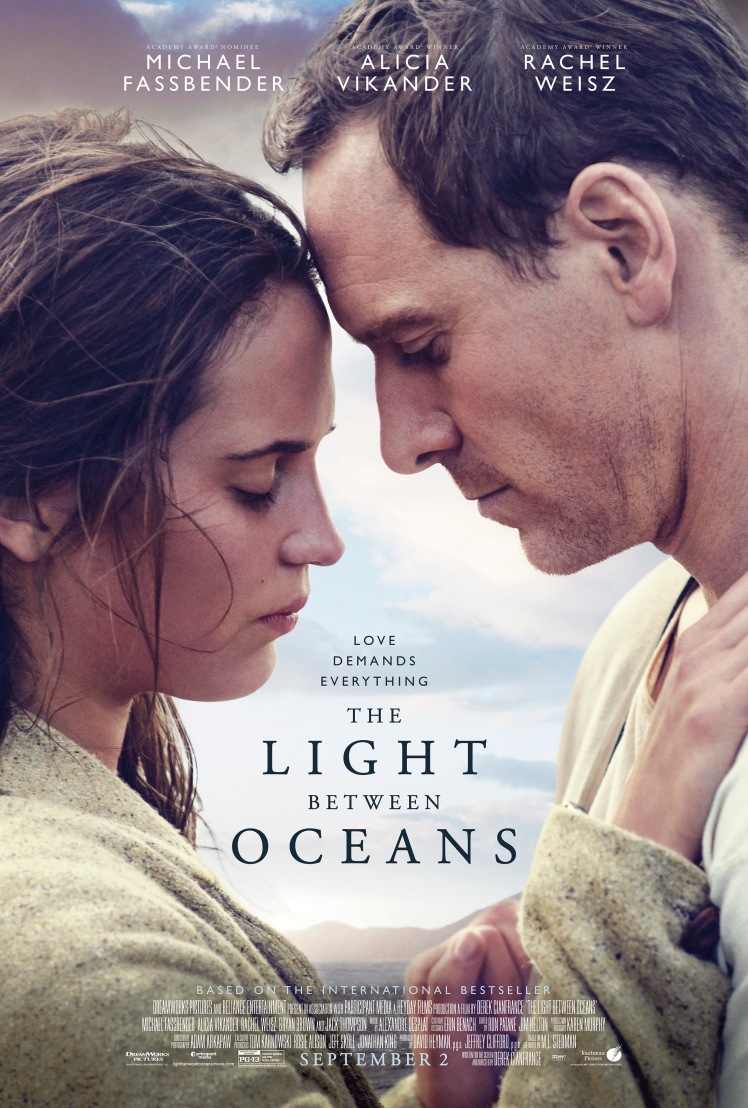 Is your love as deep as the ocean? Would you be able to do anything for the one you love? Would the past prevent you from moving forward?  In “The Light Between Oceans”, a film adaptation based on the novel by M.L. Stedman and under the direction of Derek Cianfrance (Blue Valentine, A Place Beyond the Pines), we are taken to Janus Rock, a remote island off the coast of Australia. Like the two-faced Roman God it is named after, it faces two different oceans which symbolically serves as a reminder that all beginnings have an ending just as all those who love have a past and future.  Tom (Michael Fassbender) is a war veteran struggling to find normalcy in his life after the Great War. In his search, he finds an opportunity as the lighthouse keeper at Janus Rock. Life on the secluded island is just as one would expect, quiet and rewarding, as guiding those lost at sea proves to Tom that there is light for those who seek it.

A few months later in his new position, Tom unexpectedly meets Isabel (Alicia Vikander), a light hearted and spirited young woman who had lost two brothers to the war. Learning they share the bonds of grief and loss, Isabel takes it upon herself to be the shining light that Tom had only hoped to find amidst the darkness. After a short courtship, Tom and Isabel’s relationship develops into an endearing, non-traditional love story in which the couple increasingly views each other as equals during a non-egalitarian post-war 1920s. Together they face struggles that no couple would ever expect to experience. At the time far less complicated situations would have separated them, emotionally dooming them for a life of resentment and guilt. However, their relationship remained strong through the hardest of times because the devotion they shared for one another was not faltered by the crushing of the waves that daily remained them of what could have been. But as soon as the storm had settled and stayed with them a ray of hope appears out of nowhere and breathes on new beginnings.

Through sharp and beautiful cinematography, Cianfrance is able to bring to the big screen a vibrant and timeless romance. Each scene reverberates the inner struggles that each character conveys and becomes obvious that Fassbender and Vikander are the real deal. The challenging choices the story presents after a “reawakening” occurs in both of their lives transcends across the screen and into to your heart. Rachel Weiz’s characterization of Hannah, a grieving mother with little will to live, is nothing short of magnificent as she echoes the person she once used to be before the loss of her loved ones. The score of the film is by Academy Award winner Alexandre Desplat (Argo, Philomena, The Danish Girl, Secret Life of Pets) and is the anchor that sets the motion and aura of this dramatic love story.

This is a story about love and letting go, and embracing the present and moving forward to the future. While there are moments of predictability, the dialogue is strong and thoroughly centers the story without oversaturating its ebb and flow. Highest acclaim to the performances and production of the film as it portrays the humanity that exists between the notions of right and wrong when love clouds our judgment. This film is a perfect representation of the moments in life that are taken for granted, the selfless and selfish acts that we do out of love for others and the inner sadness that we battle in our search for forgiveness. A powerful, heartbreaking story beautifully told of what it means to love and to be loved.